Meet the Academic Staff of our Spanish School in Barcelona 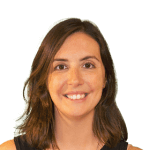 Clara was born in Buenos Aires, Argentina, but moved to Barcelona, Spain when she was very young and has lived there ever since. She has a degree in Advertising and Public Relations from the University of Barcelona, and a Master’s Degree in Event Management and a Postgraduate Degree in Business Management from Pompeu Fabra University. Clara adores her adopted city of Barcelona, and enjoys sharing her passion for the city with foreigners who visit her, which is why she entered the world of international education. She has spent several summers in Canada, where she worked and studied English. As the General Manager of the Barcelona office, Clara ensures that everything goes smoothly so that the students can make the most of their stay in the city. During her free time, Clara likes to be with her friends and travel. 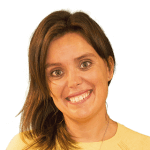 Originally from Galicia, Paula graduated from the University of Santiago de Compostela with a degree in German Philology. She is the co-author of teaching methods of Spanish for adolescents and adults for the Edinumen publishing house. In her free time, Paula enjoys reading and traveling. 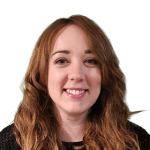 Bea is born and raised in Barcelona, Spain and graduated in Tourism, Travel and Leisure from the School of Hospitality and Tourism (CETT) at the University of Barcelona. After graduating, she decided to move to London, where she spent 3 years working in the accommodation sector. After Bea’s British adventure, she decided to take an ever bigger leap and move to Australia, where she lived in the city of Gold Coast for 3 months, and later worked in Melbourne for a year. As a native to Barcelona, she enjoys getting lost in the streets of the Gothic quarter, and as the Housing & Activities Coordinator, Bea makes sure that student get to know and enjoy the real Barcelona. In her spare time, she loves to read about history, go out with friends, and escape to a European city on a weekend. 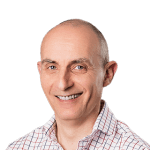 Born in Barcelona, he holds a degree in Hispanic Philology from the Universidad de Barcelona (UB) and a master’s degree in speech and language disorders from the Universidad Politécnica de Cataluña (UPC). As a teacher at Expanish he likes to pay special attention to phonetic correction, cultural aspects and the presentation of grammatical contents from a cognitive perspective but always from a basically communicative approach. He loves history, art and cinema. On the other hand, he is a great fan of opera.

Born in Barcelona, María studied both Catalán and Spanish at the Universitat Autònoma de Barcelona, as well as having a Master’s in Spanish as a Second Language Teaching, and is an expert on all things Catalonian. She studied a year abroad and when she did that, realized she wanted to share her culture with others by teaching her native language at Expanish. In her free time she is an avid yoga practioner, and is currently studying to also become a yoga professor! 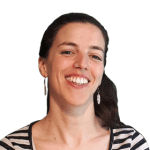 Originally from a small town in Granada, Eva graduated as a Teacher from the University of Granada. In 2014 she decided to come to Barcelona to take the International House Teacher Training course. For Eva, working as a teacher means being able to unite two of her passions: teaching and creativity. Eva loves going to the mountains and walking along the beach. 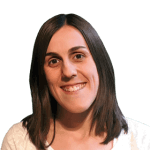 Noelia was born and raised in Barcelona, where she graduated in Hispanic Philology from the Autonomous University of Barcelona. In 2015 she completed her studies with a Master’s Degree in Spanish Language, Hispanic American Literature and Spanish as a Foreign Language at the same university, which allowed her to start teaching languages professionally thanks to the internships she did in Macao, China. In his free time he collaborates with associations that look after animal welfare and the environment and enjoys the company of his own.

Born in Barcelona, Ángel has a passion for literature and languages which has driven him to teach other his mother tongue. He studied history at the Universitat de Barcelona and also has a Master’s from the Universitat Autònoma de Barcelona for language teaching. Ángel loves watching students interact with hispanic culture and literature. He keeps studying today, finishing up a degree in psychology and continously studying French in his free time.

Originally from Madrid, Catalán culture drove Cristina to set up a home in Barcelona. These days, she follows the family tradition of teaching others, in her case with a Master’s degree in Spanish as a Second Language from the Universitat de Barcelona. At Expanish, she particularly enjoys working on the nitty-gritty aspects of Spanish grammar with the advanced classes. In her free time, Cristina is an avid fan of Flamenco, she sings and dances, and welcomes any questions about it.

Alba hails from the capital of Spain, Madrid, and has a degree in Hispanic Studies from the Universidad Autónoma de Madrid. Experiencing living abroad herself drove her to continue having international experiences whilst teaching others about her culture, which led her to teaching Spanish to foreigners. Aside from her work as a teacher, Alba is a fan of yoga and travel, which made her the right person to be in charge of Expanish Barcelona’s social media.

Carla is a local Barcelonian who decided to teach Spanish in her hometown after experiencing the career in Prague, Czech Republic. To her, it is a way to travel within the classroom as she gets to know the culture of everyone of her students. Carla has degrees in teaching, Spanish as a Second Language and Secondary School Education from a variety of universities in Barcelona. When she isn’t in the classroom, you can find Carla doing beach clean-ups, cooking, skating or hiking.